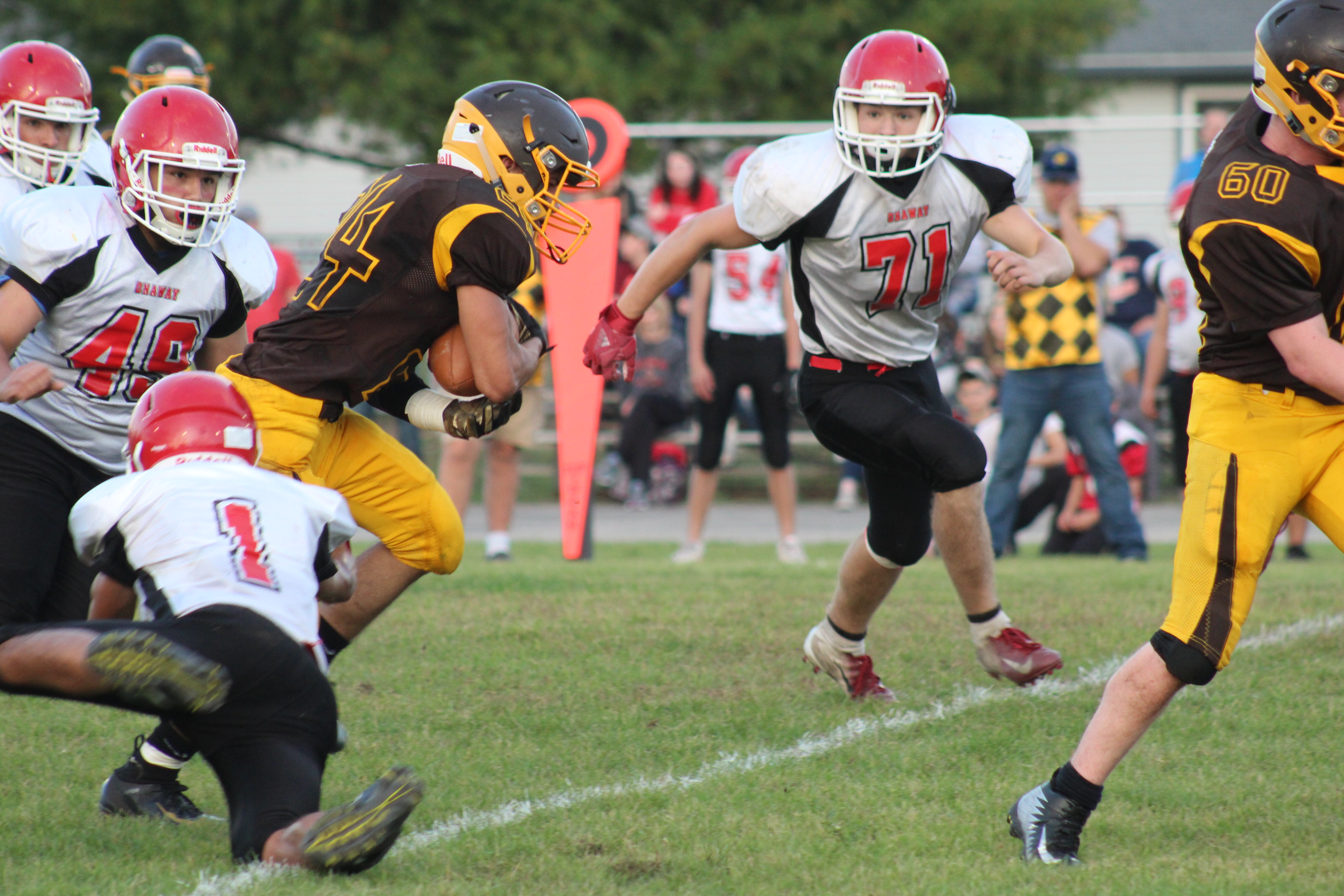 A quick recap on the 2019 Hornet football team season thus far… Week one against Bellaire, we never trailed in the game. Weeks two and three, we never had the lead until the waning moments in each game. Week four featured the visiting 2-1 Onaway Cardinals. It didn’t take long to find out which Hornet team was going to show up and play on Friday night. On Pellston’s second offensive possession, the Hornets found the end zone on a four yard run by Lakota Worthington giving Pellston a 6-0 lead. The Hornets went on a 12 play drive with 11 seconds left in the first quarter and got a one yard touchdown run by Glenn Bonter. Bonter also ran in the two point conversion. After one quarter of play, the Hornets led 14-8. In the early moments of the second quarter, Bonter, from one yard, got into the end zone behind strong upfront blocking by the offensive line. The Hornets were up 20-8. After a 35 yard run by Worthington, it would once again be Bonter on fourth down and goal from one yard out. He slid into the end zone giving Pellston a 26-16 lead. After a great defensive stand and a fourth down pass deflection by Ethan Landon, the Hornets would take over on downs. The Hornets were able to capitalize on the great field position. Bonter would connect with Ian Reimann on a 16 yard touchdown pass. Bonter passed to Chase Zink in the back corner of the end zone to complete the two point conversion. At the half, the Hornets were up 34-16. After a three and out possession by the Cardinals to start the third quarter, the Hornets, on their first possession in the second half, would get into the end zone when Bonter would find Joey Rizzardi on a seven yard touchdown pass. Pellston was then up 40-16. With just minutes left in the third quarter on 4-5, Bonter would sprint in from seven yards out for another Hornet touchdown. David Jamroz would run in for the two point conversion. Going into the fourth quarter, the Hornets were up 48-22. Pellston came out early. Garrett Cameron scored from five yards out. Bonter would connect with Zink on the two point conversion. The Hornets led 56-22. On Pellston’s next possession, Jamroz rushed in from six yards out to give the Hornets a 62-22 lead. Not to be outdone by the offense, the defense would get in on the scoring action when Ian Reimann would pick up a Cardinal fumble and scamper in from 19 yards. Reimann would step up big yet again, this time kicking in the extra point. The Hornets were up 69-22. With Bonter’s night complete, it would be Ethan Landon taking over at quarterback. It wouldn’t take him long to settle in as he drove it in from 15 yards out. Reimann would step out on the field once again and kick the extra point through. Final score: Pellston 76, Onaway 30.

Glenn Bonter would end the evening with 160 yards rushing on 25 attempts and four rushing touchdowns. He passed for 111 yards on 13 attempts including two touchdowns. David Jamroz had 111 yards rushing on 21 attempts. Defensively, the Hornets had a total of 8 fumble recoveries. Joey Rizzardi led the charge on defense with 14 combined tackles and one fumble recovery. Glenn Bonter, David Jamroz, Lakota Worthington, and Ethan Landon each had 8 combined tackles. The Hornets are now 4-0 heading to Atlanta this Friday night. So, if you’re looking for something to do, take the hour drive down to Atlanta and cheer on your Hornet football team!