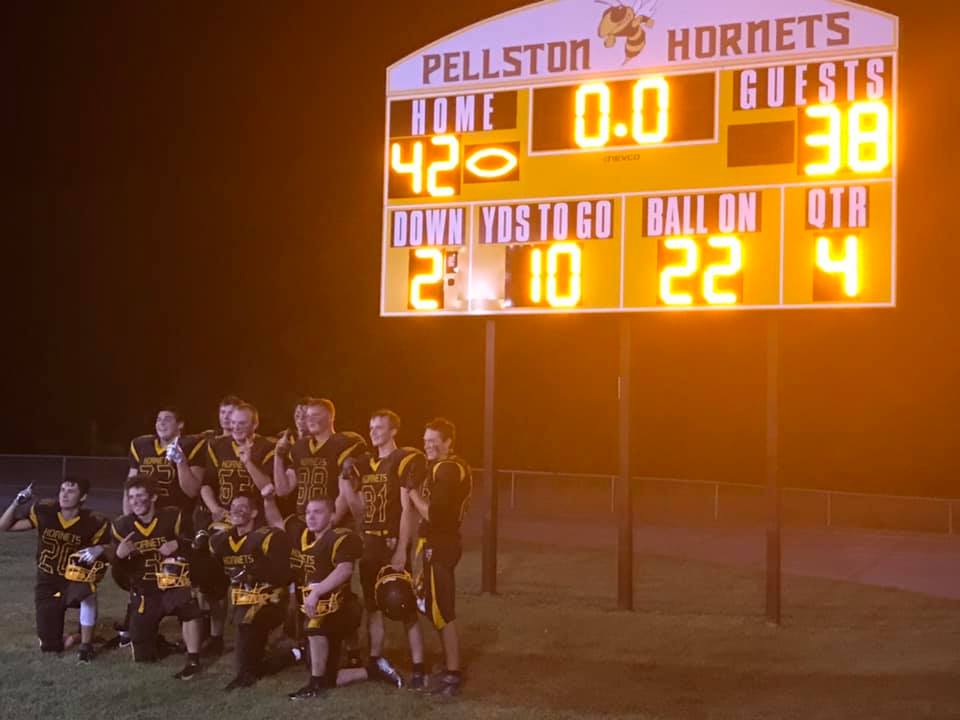 The Hornets’ football team completed their second game of the season defeating the visiting Posen Vikings 42-38. In week one, Pellston never trailed in the game. Friday night against Posen, it wasn’t until the final minutes that the Hornets would overcome an 18 point deficit and take the lead for good. On Pellston’s second offensive possession, Glenn Bonter scampered in from 9 yards out to tie the score up 6-6. In the final minutes of the first quarter, Isaiah Crawford punched it in from one yard out to tie the game at 14-14. Going into the half, the Hornets found themselves trailing by a score of 30-14. In the third quarter, David Jamroz found the end zone on a 34 yard run and cut into the Posen lead by a score of 30-20. Halfway through the third period, Bonter again found the end zone on a one yard run. After the 2 point conversion from Bonter to Evan Cameron, the Hornets were down 38-28. Ian Reimann kicked a successful onside kick that was recovered by Ethan Landon. The Hornets would take full advantage of the turnover when Lakota Worthington would hit pay dirt on a 6 yard sprint into the end zone and chipping away at the Posen lead, now 38-34. After a great defensive stop by the Hornets, the offense would go on a 71 yard 10 play drive where Garrett Cameron would find the end zone on a 5 yard run behind some great blocking upfront by the offensive line. After a successful 2 point conversion by Garrett Cameron, the Hornets found themselves on unfamiliar ground for the evening leading 42-38. With 5:01 left in the game, it would be up to the Hornet defense to deny the Vikings a scoring opportunity. The defense wouldn’t disappoint either when Glenn Bonter would intercept a pass from the 5 yard line to preserve the Hornet victory.

Offensively, the Hornets were led by David Jamroz, who on 18 attempts rushed for 201 yards and one touchdown. Glenn Bonter would rush for 168 yards on 20 attempts with two touchdowns and throw 13 times for 107 yards. To cap off the scoring Isaiah Crawford, Lakota Worthington, and Garrett Cameron each added a touchdown. Defensively, Joey Rizzardi led the team in tackles with 6 solo and 2 assists. Zander Overholt, Ian Reimann, and David Jamroz each had 4 solo tackles plus multiple assists. Bonter and Worthington each had a pick. Final score, Pellston 42, Posen 38. Pellston improves to 2-0 on the season and travels to Au Gres this Friday.